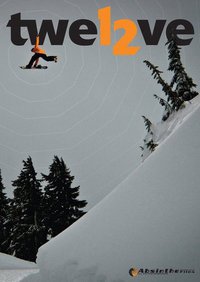 With this week’s earthquake AND Hurricane Irene on the way, all this “2012-end-of-the-world” madness makes it seem sort of appropriate that Twel2ve premieres in Park City tonight. This year, Absinthe teamed up w/Mikey LeBlanc’s new kidsKNOW for exclusive US distribution. They even let him star in their “Pre-Trailer” –

Twel2ve is the latest release from Absinthe Films & features riders Gigi Rüf, Bode Merrill, Dan Brisse, JP Solberg, Annie Boulanger and more.  (If you’re in our neck of the woods, you can catch the NYC stop on the flick’s North American Tour in November!)

The temperature’s barely dropped below 70 here in Jersey, but we’re already well into video premiere season. Volcom’s 9191 was the latest to roll through the NYC area, so naturally several of EV’s finest went to check it out at the Anthology Film Archive in the East Village.

9191 is described as “a mathematical equation of sideways style” and was inspired by the travels of Gigi Ruf. (Other riders featured include Wille Yli-Luoma, Bryan Iguchi, Luke Mitrani, Curtis Ciszek, and Blair Habenicht.) Personally, I was most excited to hear the soundtrack created especially for the film, but was really blown away by the overall  combination of elements. The riding was intense and the camera angles emphasized just how immense & impressive Gigi’s backcountry riding is. Cinematography that blended super 8 footage and trippy effects effortlessly won over the artsy crowd and succeeded creating a signature style that never overwhelmed the riding. All of this, with a breathtaking backdrop and set to Baron’s alternately metal/haunting score made 9191 a unanimous hit for all of us. (Plus Gigi was nice enough to sign a poster for the EV Board Room)

We advise you to see it ASAP–afterwards, expect an immediate desire to watch it again, rock Gigi’s signature Volcom line, and d/l the soundtrack on iTunes. For now, feast your eyes on the official trailer;